Talk about anything here as long as it is not against the rules.
Post Reply
6 posts • Page 1 of 1

So last Thursday 4/26/18, a new Home Depot opened here in Stamford, Ct, so I thought I'd stop by and check it out. When I got there, I noticed a big tent that the Traeger Grill Co. had set up to promote there BBQ pellet smokers. I walked over chatted with the salesman about the grills and he showed me the Traeger Pro Series 34 that they had some chicken cooking on it for tasting. (no did not try any)
Anyway, before leaving the salesman said "Want don't you sign up for new letter, this will enter you into our give away drawing".
The give away was the Traeger Pro Series 34 that was being used for the demo, so I signed up and never gave it a second thought.
Well yesterday I got the call, I won the Traeger. So I went down to pick it up and they had the whole thing cleaned up like new.
Winner - Winner Chicken dinner!
They also included some accessories like a new cover, large bag of pellets, seasoning spices and there cook book. 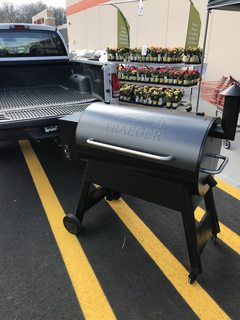 Kijek. Lucky you. You will like the treager. I've had one since the first year they were made and that was a very long time ago. They were made only 30 miles from me but now made out of country I believe. None the less they have made many strides since I first owned it. My son in law has it now and I bought a Green Mountain.
Enjoy.

Great deal! I have a friend who owns one and he loves it.
Top

Gotta love when a random bit of luck comes your way!
Top

Congrat's on the the new Traeger.
Top

Thanks guys, and yes a bit of luck feels great, biggest thing I ever won, since I never won anything, except for my wife's love.
Cooked a nice 1.5lb organic salmon yesterday, my seasons, but there reccommendation of time and temp.
Wow!, it truly was the best salmon my wife and I ever had, outstanding bbq flavor and cooked to perfection, nice and moist.
Can't wait to cook some other meats with feets! LOL
Top
Post Reply
6 posts • Page 1 of 1