I thought it funny

Talk about anything here as long as it is not against the rules.
Post Reply
6 posts • Page 1 of 1

I thought it funny

I've been working on processing a pig and decided to use some of the skin to make pork skins. I had gone through all the steps and had them ready to fry and my daughter had mixed up a seasoning blend to dust them with when a friend dropped by. As we began to fry the skins he began telling us that the grease was too hot and this that and the other. I have to confess that he has been a friend for years yet I never knew he was such an expert on fried pork skins ......., or maybe it was just the beer talking,

Anyway after frying the first batch my daughter seasoned them and we tasted them and I thought they were pretty good but he said they weren't good and they needed more spice. I took this as an affront to my daughter's culinary expertise so on the next batch - while he was busy telling us how we were supposed to be doing things - I secretly dusted the finished pork skins with my daughter's seasoning blend along with a liberal dusting of Carolina Reaper and Chocolate Bhutlah powder and gave things a good shake and offered him one to try as I winked at my daughter.

After he stuck the whole skin in his mouth and began to chew it the look on his face was priceless. My daughter and I stood in awe as we witnessed beads of sweat rise from his forehead and he began making some expletive remarks about how spicy they were and asked what I did. He looked at me as if he expected me to offer him a glass of milk or some other cool beverage but I didn't budge. I wasn't about to leave the show at this point. The look on his face was priceless. He had tears streaming down his face and criticized the pork skins saying they were too hot. To that I replied that he was just fickle and he needed to make up his mind as to whether he wanted them mild or spicy,

I wish I had captured this on video, Oh and yes, I can attest that they spicy, Took nearly an hour for my lips to regain their sensation but only a half hour for my eyebrows to stop burning.

If you have one of these "experts" then I highly recommend your trying the same. It should definitely stop them from sucking eggs. 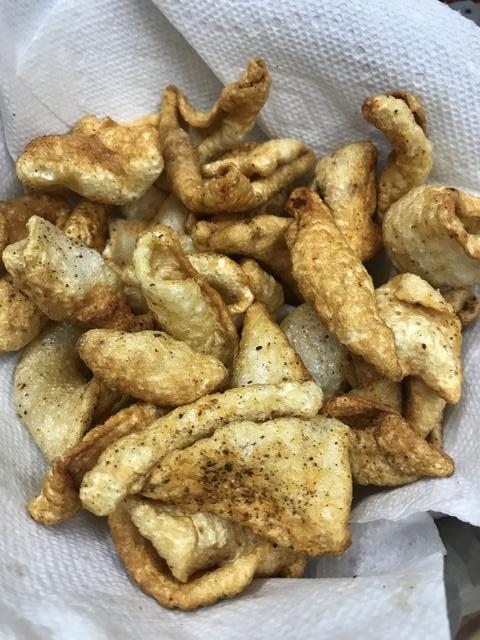 LOL, that seriously made me laugh out loud! I'm no expert but those look dand good from here
Top

They did turn out really good .... except for the one batch. They are rather spicy! I wish I had videoed the whole thing. It was hilarious.
Top