Just when I thought I was getting a handle on matters, you all start to come up with this new chamber thing, DAM!

I cure my "stuff" in refrigerator, then put in my "other" temp & humidity" controlled chamber until done.

Just when I thought I was getting a handle on matters, you all start to come up with this new chamber thing, DAM!

I cure my "stuff" in refrigerator, then put in my "other" temp & humidity" controlled chamber until done.

No - I think you got it right - the normal way is to ferment and dry in one chamber.

I started using a separate fermentation and drying chamber because I have a large room I can use for drying that can hold many times the volume of my fermentation chamber - so I can do a batch every week.

If you can fit everything you want to make over the whole cycle into one chamber then that would be simplest way.
Last edited by reddal on Tue Feb 20, 2018 12:20, edited 1 time in total.
Top

I use different only because I always have something going at 54 degrees in the chamber. When my old refrigerator broke, that's the one I use for fermentation. I keep it unplugged and place a small heater in it on a controller only when I need to ferment. After fermentation, I wipe it down and sanitize it, keep the door open for a couple of days, then close it up until I need it again. My chamber is a commercial double door stainless turboair. I couldn't be happier. I refuse to cut into it, so I have everything wired thru the gasket. Right now I have about 50 kilos of meat in it and there's still plenty of room for more.
Top

Kijek wrote:I cure my "stuff" in refrigerator, then put in my "other" temp & humidity" controlled chamber until done.

Well Kijeck if you had purchased the book The Art of Making Fermented sausage like you were going too... you would already know the advantages of having both!!

They can be as simple as Redzeds cooler... 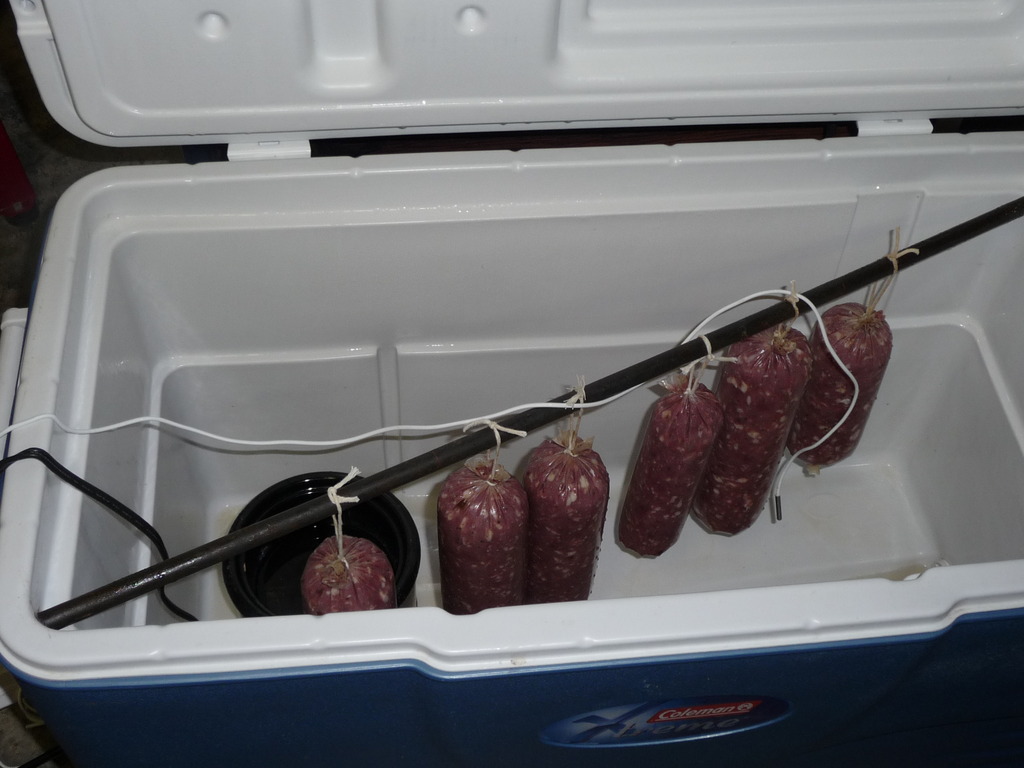 Or Build a plywood box... 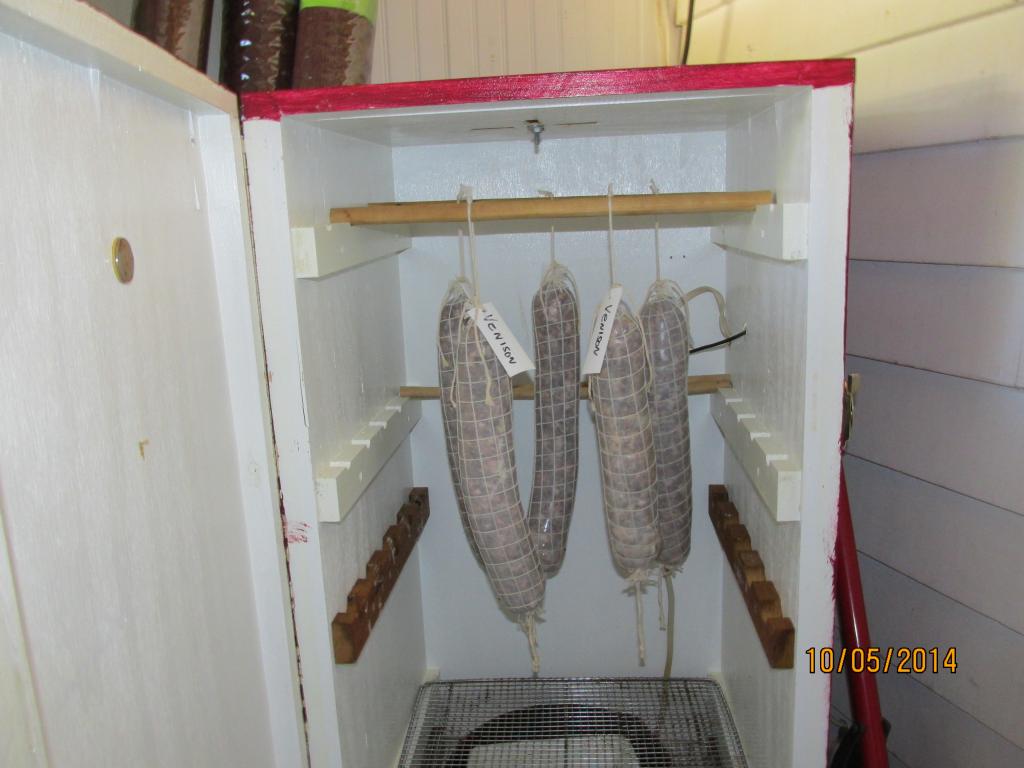 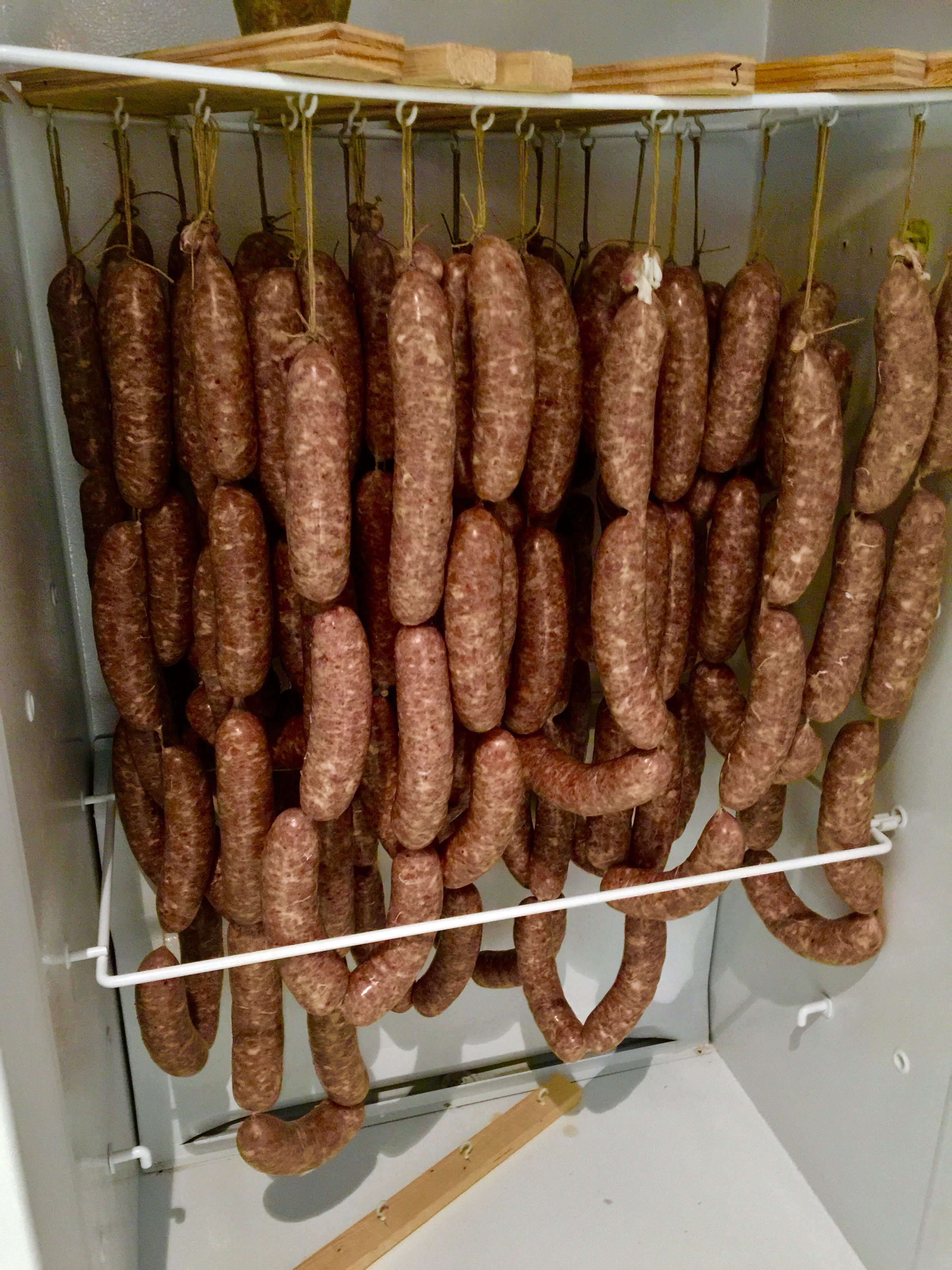 Hey gang!
I was thinking about using one chamber to do both until I came upon this a few weeks back. While checking out other topics on here I saw a member using a dishwasher for a smoker and I said, that would be perfect for a fermentation chamber.
My question on this approach is does it need a air intake/exhaust and a fan like a curing chamber??
25 years ago I use to smoke pot. Now I smoke pork.
Top

No. You just need high humidity and be able to accurately control the temp. No circulation or exchange needed.
Top

Thanks for the reply, Bob!
25 years ago I use to smoke pot. Now I smoke pork.
Top

I only ferment about 10 lbs at a time. Here’s a couple pics of my setup. The bottom container initially housed a warm steam vaporizer, but I couldn’t keep the relative humidity from rocketing up to 99%+ (using it as a heat and humidity generator, controlled by a simple thermostat, and the space is too small to control humidity from a vaporizer with a hygrostat)

I ended up achieving a good balance of heat and rh using a ceramic heat lamp (at the top), and a cheap heating pad (the kind without “auto-shutoff”) at the bottom of the container, with a wet towel over it (inside a freezer bag, to protect it from excess moisture, and to keep it sterile). Both the heat lamp and heating pad are plugged into a simple thermostat, with the sensor through a hole in the side of the chamber.

I insulated it to make it more efficient and keep the condensation down.

The heating pad method could probably be controlled with a hygrostat, but so far I haven’t found that necessary.

I just reviewed my post, and realized that I should probably explain why the Mylar side of the insulation on my fermentation chamber is facing outward/backwards.

I’m not sure if my thinking was correct, from an engineering standpoint, but it WAS intentional. I added the insulation foam board to reduce condensation on the container walls and remote thermometer/hygrometer (against the side, inside), and not so much to contain the heat inside. My thinking was that if the chamber was too efficient at maintaining a relatively high internal temperature, the “heating-pad-humidifier” wouldn’t turn on often enough to generate the desired humidification without a separate controller.

As it is, the chamber has been working nearly perfectly, so I figure if it ain’t broke, don’t fix it.

I've seen alot of guys just buy a bakers rack and wrap it in plastic, like a greenhouse. Put a hang a lightbulb in it and plug the lightbulb into a controller. Set the controller for your fermentation temperature. Most likely, the meat alone will hold a high enough humidity. Once you go this route, you probably won't use your chamber for fermenting anymore. It will become an issue when you have things hanging in it and you can't use it for anything other than a curing chamber.
Top

Sometimes it’s hard to let go of an idea/innovation or design that took a lot of time, thought and effort to put together, but I always try to keep an open mind. Smarter, better, faster is ultimately my bottom line. For now I’m happy with my fermentation chamber because the hanging rods fit in my fermenter, heat smoker, cold smoker and curing chamber, (up to about 20 lbs at a time) without any fuss...but I will definitely have to go with another method if I decide to do more than one batch a week.
Top

LOUSANTELLO wrote: ↑
Tue May 21, 2019 13:23
I've seen alot of guys just buy a bakers rack and wrap it in plastic, like a greenhouse. Put a hang a lightbulb in it and plug the lightbulb into a controller. Set the controller for your fermentation temperature.

I just revisited this post and realized exactly what you were saying Lousantello.

I should clarify that I use both the method/setup I described (with pics), and the method you described in the same chamber alternately (depending on what I’m fermenting). I only use the heat lamp/heating pad when I’m doing a fast fermentation at high temps like 86 degrees for semi-dry sausages, when high/uniform humidity isn’t essential (and don’t want a dripping, soggy mess). When I’m making slow cured/dry sausages that require several days at 68 degrees (and even slight case hardening is a no-no), I just use the heating pad (with the same temp controller) with the lid on the container (cracked open a bit if it gets too humid, which usually isn’t an issue at lower fermentation temps)...basically just as you described, with very consistent results.

I’m just following up to be clear that I would NOT recommend the setup I posted in my initial reply to this post for anything other than semi-dry sausages, like summer sausage, because it does tend to create some noticeable case hardening, especially on the surfaces closest to the heat source.
Top
Post Reply
12 posts • Page 1 of 1