What is the Craziest Salami flavor you've ever made?

What is the Craziest Salami flavor you've ever made?

by cajuneric
I am rounding down the first 4 weeks of Salami making. In these 4 weeks I've been contemplating different flavors of Salami and was wondering if anyone out there has ventured outside the realm of traditional.

Here's a few ideas that I was thinking about. I am anticipating in the next few weeks most of these will become a reality..


Would love to hear about your crazy inventions and obstacles...


Eric
by Bob K
If you used real Blue Cheese not sure how the mold would work out.
Two Of Rezded's concoctions that come to mind and have made multiple times.

http://www.wedlinydomowe.pl/en/viewtopic.php?t=7751
You should be in the neighborhood for quality ingredients....

And http://www.wedlinydomowe.pl/en/viewtopic.php?t=7666
Up the heat and use extract , the zest can be gritty...
by cajuneric
Nice!!! I didn't even think of using the sticky stuff!!! I like that he decarboxylized his herb.

I thought about the same thing with blue cheese. Penicillium roqueforti might die off encased in the sausage and leave a slimy mess or it might give the sausage blue streaks...

I just got some Sodium Erytorbate. I thought that this might help in the discoloration a bit when adding some of these ingredients..
by Bob K
The Sodium Erythorbate is also a cure excelerant which may or may not have benefits for a long term dry cured product, but I do use it more often on cured and cooked products. Also great for color preservation on many products.

Annatto also adds more of an Orange color to Orange - fennel Salami, and the decarbed herb added to it can make it a unique salami. Panama Orange

by cajuneric
So that poses a different question. If I use S. Erythorbate will it cure/dry faster? If I am using cure 2 in salami for a 6-8 week dry time will the SE convert the nitrate into nitric acid rendering the cure ineffective or do I have it all wrong...

I see that commercially produced salami uses this ingredient but I guess I don't understand it too well.

Eric
by Butterbean
I think using S. Erythorbate would be counterproductive if you are using Cure 2. When thinking of cures I consider Cure 1 something like a BC powder that you want to act fast and Cure 2 is like a Tylenol that you want to give a longer more time released effect. S. Erythorbate would be like supercharging the BC powder so it works faster. Fast is not what you want on a long cured product.
by Kijek
This is an interesting subject, and it seems that few have gone outside the realm. But I like this, especially the Baklava Salami (real radical) but interesting.
by Butterbean

cajuneric wrote:
I see that commercially produced salami uses this ingredient but I guess I don't understand it too well.

I'm not sure but I believe they use it because they are shooting for a real fast cure and acidity drop for their safety hurdle. From a food safety aspect this may be the safest way to make salami but the flavors don't have time to develop so you have a sacrifice.
by Bob K
If you are looking for something different: 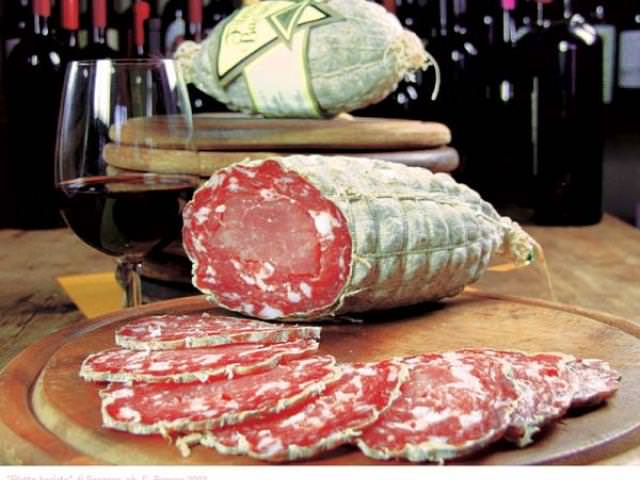 by cajuneric
Is that a pork tenderloin wrapped in Salami meat?
by Bob K
Yes it is. I have never made one. Looks like a challenge to get cased

Good idea; It looks very interesting.
Congratulations
by cajuneric
So I can't wait to share with you the process of this week's labor. I'm going to try and knock out about 8 different flavors of salami. One that I'm very excited about is my homage to Panama. I've only been here 7 years but this place is out of control amazing.

I thought that I could create a salami for the country that has given me so much. I'll call it.

El Salami Boqueteña. I'll include some of the most iconic flavors that Panama has as a country. Think coffe, rum, chocolate, mango, passion fruit, habanero pepper, and the fruit itself from the coffee plant. It has a wonderful and unique taste.


Ill make 10 pounds to see how it comes out but I think that it's going to be off the charts. Once I make it I'll post a recipe with the video!! Let me know what you think

Eric
by redzed
I hope that mango and passion fruit will be dry. And I would keep the amounts of the other ingredients on the lower end of the scale.

When I spent a week in Panama 3 years ago, I could not find any good sausages. I was hoping to find a unique Panamanian chorizo but was somewhat disappointed. The best food I had there was ceviche at the Fish Market in Panama City, and we also stumbled on a family restaurant that had a knockout paella. It was so good that we went back the next day for another round.
by Butterbean
Sounds interesting Eric.
All times are UTC+01:00
Page 1 of 4
Powered by phpBB® Forum Software © phpBB Limited
https://www.phpbb.com/