Happy New Year to everyone!
I am going to make 6.5 kg of Summer sausage tomorrow. 50/50 pork shoulder and lean beef.
I don't want to use FL-C culture this time and don't have fermento on hands so... I decided to use dry buttermilk. I could not find just "dry buttermilk" in neither of 5 supermarkets in my neighborhood but found a Cultured buttermilk blend for "cooking and baking". Ingredients:
1. Sweet cream churned buttermilk
2. sweet dairy whey
3. Lactic acid
What would you say? Can this dry buttermilk be used for the purpose?
Thank you in advance!
'
Top

I'm probably wrong for doing it but I have. Actually keep it in the kitchen and have used it several times in the past. Didn't have a control so I can't say it worked or not but the sausage was good in the end. Is yours a real fine chalky consistency? That is the type I use.
Top

Exactly right- it is fine, chalky consistency. As soon as you have tried it before and it did not spoil your sausage - I'll try it..... Thank you for your respond!
Top

I don't think it will hurt. I rarely use binders now and I know some say the milk powder you can buy at store isn't the same so I honestly don't know. Can't find enough information on it. That said, a few years ago there was a large sausage shop closing that was run by a Swedish man and I went to the auction to see what I could pick up. After the auction he gave me a 50 lb sac of meat binder he used in his processing. I can't remember all the ingredients but the primary ingredient was whey. So I would think if he used this product then the whey in the milk powder should be helpful. Sounds reasonable in my mind. FWIW - I never even used it because like a dummy I neglected to ask him how to use it. I later called the company that made it but being a small timer they wouldn't give me the time of day.
Top

I use binders extremely rear: only for hot dogs and bologna. I decided to use dry buttermilk for SS only- to give it a little of tang taste. Just stuffed it in 65 mm collagen natural protein casing (did not have fibrous casing on hands), placed it in the smoker at 130F for an hour. Start smoking at 140F gradually (hourly) increasing the temp till 170F. After IT reaches 140F - will poach sausage using my Anova sous vide device till IT 149F . We'll see if buttermilk works.... I'll keep you posted.... Once again - thank you for your input!
Top

OK... Finished my SS last Friday. Not exactly summer sausage taste but... absolutely delicious. Sausage does not have too much of tang taste (almost nothing) but taste is great. It's not exactly firm (I like slightly more firm sausage) and I think I know why: very possible fat ratio was something between 70/30 or even 65/35 - little too much fat.... My wife usually does not really care when I share my meats/sausages with my friends, relatives and co-workers but this time she vetoed on sharing this sausage with anyone. 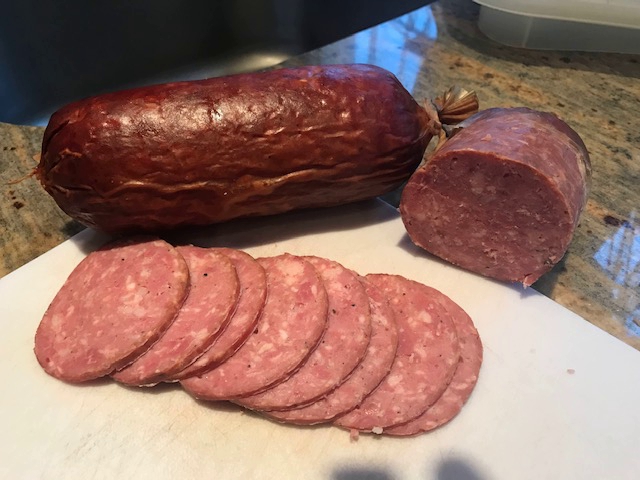 FL-C culture was not available easily in India so I too tried natural sources , but not butter milk, and definitely not the store bought buttermilk. I had Thermophilic and Mesophilic bacteria that I use for cheese making. Not knowing which of the two works , I decided to add both. But since both cultures work at different temperatures, I chose a cheese recipe that required both Butterkase. I followed the steps till the addition of Thermophilic, and left the milk overnight. The result was a very firm curd that I then used in my fermented sausages. Some recipes call for Ascorbic acid, which too is a bit rare on the ground here. So I made do with the next best thing, citric acid. The results were extremely satisfactory, nice and tangy.
Post Script : I saved some of the curd in the freezer as a starter for the next time I make fermented sausages, which is today

Looks good Bolepo. What did you think of the buttermilk powder? Could its water binding properties not have caused your SS to be moister than you prefer?
Top

Bolepa, the summer sausage looks very nice. This type of sausage is a semi-dry type and will firm up in a few days drying time at a temp of <15C. You could also give it another 4-6 hours of cold or even warm smoke on the second day. That way it will dry faster and have a firmer texture.

joe_indi, for products such as summer sausage and Northern European cooked salamis where a tang is desirable, you can easily ferment with probiotic yogourt. You will get a good fermentation at 25-30C and a Ph drop to less than 5 usually in 36hours. I have experimented with using yogourt in the past and it worked every time. I would not recommend it for southern European salami because we need staphylococcus bacteria to break down the nitrates and develop the flavour and aroma in the sausage.
Top

Butterbean and redzed - thank you very much for your comments!
Like I said before, I don't think that the buttermilk powder had real impact on tangy taste. The tangy taste was not really noticeable. About sausage being a little more moist: honestly, I don't know. This was my first experiment with dry buttermilk so... Could it be because of meat/fat ratio? Like I said, it was approximately 70/30 or 65/35.
Bout drying the sausage longer: that's probably it.... I dried it only overnight, taste it and vac-packed right after. Should have dry it a bit longer. Oh, well... Next time I will.
Thank you gentlemen for your inputs!
Top
Post Reply
11 posts • Page 1 of 1