by Agoracritus
I just made a few pounds of Braunschweiger (Leberwurst) for the first time. (Not really sure why I haven’t tried making it before, but probably because even though I’ve always liked Liverwurst, I don’t eat it very frequently.)

I followed the recipe (Marianski’s?) on the sister site, except I substituted chicken livers (since I couldn’t find any pork or calf liver locally).

What a great recipe! The only deviation from the directions I made was poaching the stuffed casings at 150 degrees for 2.5 hours (sous vide). I figured the lower temp would be okay since I poached the livers above the recommended safe internal temperature for organ meats prior to cooling and grinding, and the new safe recommended temp for pork is only 145 degrees.

So much better than store bought!!! More spreadable/better texture, better flavor and without a lingering bitter aftertaste.

I’ll definitely be making this again, and I think next time I’ll cold smoke some for comparison.

by DanMcG
That looks great! I've thought about using chicken liver for the same reason, can't find anything else without special ordering. I think you've convinced me to give it a try.

by bolepa
Nice looking liverwurst! I have a question though... I have noticed a few air pockets on this sausage. I have the same when I make bologna or hot dogs and I do meat emulsification using my food processor. If I just grind meat through 3 mm plate twice (after grinding through 5 mm before) - I don't have any air pockets in my sausages... But texture with emulsification is definitely better then with grinding. My question: is it possible to avoid air pocket in sausages when meat is emulsified? Thanks!

Highly unlikely, everyone gets some, even the commercial guys with the vacuum stuffers still get some bubbles

by redzed
Braunschweiger is a liver sausage for those who really love liver. Using chicken livers will produce a milder tasting product than with pork or beef. Agoracritus your braunschweiger looks superb!

It's very difficult if not impossible to avoid air pockets using a food processor or a small buffalo type chopper. Some hobbyists claim that vacuum sealing decreases the amount and size of the air pockets. I have yet to try this because it is such a messy process and I don't have a chamber vac. I learned to live with the little holes and they don't take anything away from the taste.

by bolepa
Bob K and redzed, thank you very much for answering my question. It is what it is - I'll leave with air packets....

by Agoracritus
Thanks for the compliments!

In regards to the air pockets, the air bubbles are actually pretty small. What looks like larger air pockets are mostly where bits of minced onion popped out when I made slices.
I used a stand mixer with the paddle attachment to do the emulsification and a vertical stuffer packed as well as I could to fill the casings.

I was a little bit disappointed at first with even small air pockets, but I couldn’t think of any way to get no air in the mix, so I appreciate the feedback that it’s normal (if not inevitable).

by fatboyz
I made this Liverwurst on the weekend from my deer liver. This is a recipe from a German friend. I don't like the real fine type and this is a little coarser. It has a lot of Marjoram in it. It is made with 40% pork belly trim, 40% lean Deer, one Deer liver, and 300 grams of bacon. 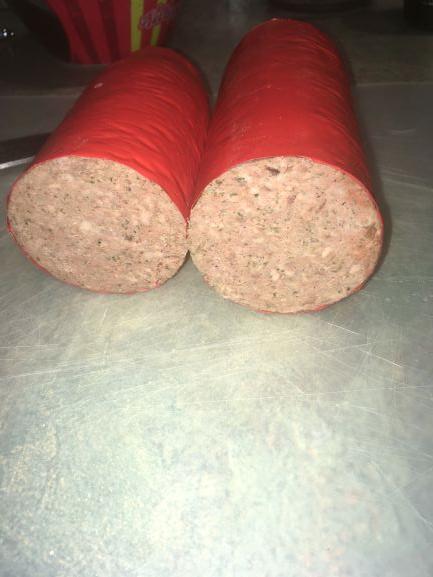 by Butterbean
Looks good. I've tried to use deer liver before in other things and just can't get used to it. Just too strong. I might give this a try. Thanks for sharing.

by fatboyz
I only use the liver from a young buck or a doe. I posted the recipe last year in the sausages forum

by fatboyz
Here is the recipe for Albertaed

cube up the deer and belly trim and put in a pot with the onion quartered with enough water to cover. boil until cooked. Drop the whole liver into the water for 2 min to seal the pours. Now grind all the cooked meat and onion plus the liver and onion and the raw bacon through a 1/4" plate. Grind it a second time through a 1/8" plate. mix in all the spices and stuff into beef middles or 65mm fibrous casings. Poach in water for 1 hour. Chill and done, or if desired cold smoke for 2 hours.

by Albertaed
I’m Going to give it a try after Xmas. Thanks!!
All times are UTC+01:00
Page 1 of 1
Powered by phpBB® Forum Software © phpBB Limited
https://www.phpbb.com/