Bolepa, if I made shed some light on what I do. From what I've done is to slowly boil everything and by boiling, I mean a very, very light rolling boil, to the point of it not even wanting to boil. Remove all the "scum" that is floating while it's boiling. Keep removing throught the boiling process, till there isnt any left. Do this for about 3-4 hrs. This will give you a clear broth as well as very tender meat. Hope this helps.
JjNUrK
Top

jjnurk, thank you for the advice. I remember my mother used to use the same process but I tried it so many times with a little success. The key word here is what you said: "not even wanting to boil". Salceson is on my "to do soon" list so I`ll try my best to produce clear broth.

redzed wrote:I used 5 pork feet (new breed developed by Monsanto), one hock, 2 pork tongues and some lean pork trimmings. Total weight approx. 8 lbs. The pork feet were partially cut up and I scored the hocks. I dry cured everything for 3 days with 70 grams sea salt and a tablespoon of cure 1.

I then washed the meat with cold water, put in pot and added water just to cover. To this I threw in a few bay leaves and a bunch of black peppercorns. Simmered for about three hours at just below boiling temp, until the feet and hocks fell apart. Did some skimming alon the way to keep the broth clear. I then picked through everything separating the meat from the bones and hard gristle, skinned the tongues and made cut some of the larger pieces into strips. I removed some of the fat from the skins and together with the I semifroze them and then chopped them into pieces like a chopped onion. The broth was strained, tasted for saltiness and further reduced.

More instruction on page 1 and throughout the string...including how to recover from a split bung...has been edited to a PG rating.

jjnurk wrote:No cure for this one. I threw a little but of #1 in the pot during boiling along with the spices. I do recall reading others that have cured for 3 days or so but this was a spur of the moment project and now I'm thinking thats what the problem could be regarding the lack of saltiness. I boiled the pork tongues for about 10 min, skinned them, cut them in 1/2 and added pork hocks, covered with water/spices and boiled.

I used to cure the meats in brine but no longer do that. Instead I do what you did, just add a bit of Cure #1 into the cooking broth to get the red colour. I don't cut up any of the meats when cooking in the droth and don't add any salt to it, only some flavourings such as bay leaves, onions, and a lemon. After the meats are cooked and cooled (but still warm), I cube the leaner cuts, separate the skins and the tendons, chop finely with a cleaver or coll in fridge and grind. The broth is then boiled gently to reduce it to strengthen the natural gelatins. And speaking of that, it is important to also make sure that you have a set of pork feet in there, they will provide the gelatin and added flavour. I let the broth settle after the cooking and then strain it through a fine cheese cloth, and skim off the fat. I then add the broth (approximately 10-12% of the weight of meats) to the meat, and chopped skins and tendons, and then weigh the mixture. I then add 2% salt lots of freshly chopped garlic, ground caraway and black pepper. After stuffing the salceson is poached for 90 minutes at 75-80C. While cooling it's a good idea to kepp turning it so that the meats, broth an spices are all distributed evenly.

To answer bolepa, my broth is not that clear. I do my best as described above, but simply impossible when making salcesons. In many of the commercially made products they use a n artificially flavoured clear broth with added gelatins.
Top

I've pretty much have done everything that you have done, except for putting the flavourings and salt at the end, as well as the poaching. My Mom, who initially requested this dish, mentioned that back in the motherland, they also poached the final product, but she couldn't remember why. Now that you've shared your method, makes a lot of sense. thx.
JjNUrK
Top

Forgot to ask.
Has anyone put slaceson into vacuum packs to store for a longer time? Or is this a product that needs to consumed in a short period of time? Reason for asking is, considering the amount of messing around with this, to make a larger batch and storing it in vac packs.
JjNUrK
Top

my broth is not that clear

" Thank you for your reply, sir! Sounds like I don't have to kill myself over trying to make 100% clear broth!!!
Top

jjnurk wrote:Has anyone put slaceson into vacuum packs to store for a longer time? Or is this a product that needs to consumed in a short period of time?

Vac sealed it freezes well. Refrigerated....it never makes it past a week!

Had to make room in the freezer and made a salceson. Turned out very well. Classic Polish flavours with a strong garlic presence Holds together very well and can be sliced thinly. 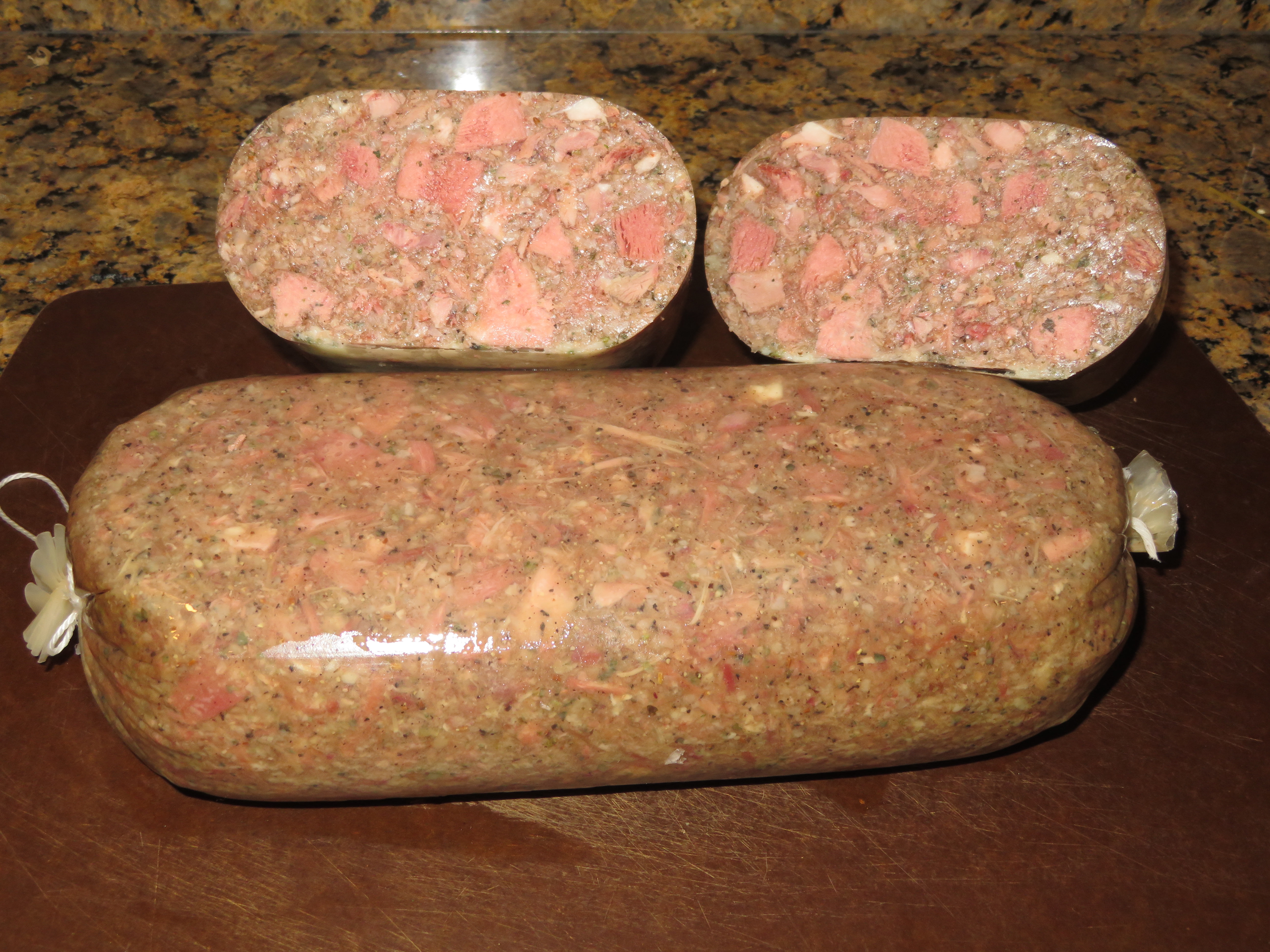 This one is without head meat, made with pork hocks, pork feet, skins and beef tongues. Seasoned with salt 1.7%salt, BP .3%. garlic .5%, marjoram .15%, ground caraway .15%. Natural gelatin from the feet and skins.
Top

That looks really, really nice. Do you mince or finely chop a specifc meat and leave others as bigger chunks eg, beef?
JjNUrK
Top

jjnurk wrote:That looks really, really nice. Do you mince or finely chop a specifc meat and leave others as bigger chunks eg, beef?

I first freeze and then grind the skins, tendons and fatter pieces of meat through the 4.5mm plate. Some people are turned off by lager pieces of fat and skin, but they taste so good and are an essential component in a salceson.
Top

redzed, Once again: looks beautiful and very testy. Salceson was on my list to-do for last 6 month but still waiting and trying to find beef tongue on sale. $5.99 per pound a little too expensive for me but I still keep my hope...
"Seasoned with salt 1.7%salt, BP .3%. garlic .5%, marjoram .15%, ground caraway .15%." - I assume that Cure 1 is also added? From your previous posts I know that you always add Cure 1 to the mix. My question is only: do you add Cure 1 while cooking (simmer) or when the meat and broth is cooled to room temperature? Thank you!
Top

Cure is optional. But adding it affects the flavour and gives it that red/pink colour. To do it properly according to recipes in Polish manuals, the meats are first brine cured before cooking. I do that when I have time, but this time I cheated.

I siply added a tablespoon of Cure #1 to the approximately 5 liters of cooking broth. That was enough to give me the colour
Top

Thank you, redzed. It's my understanding that you added Cure 1 to "cooking" broth while is was at boiling (or near) point? I am sorry for bugging you with this but I just want to be absolutely certain on the process. Thank you again! Your help is really appreciated.
Top

It's been a while and I needed another salceson fix. I had some hocks, a large beef tongue and skins in the freezer and it was also time to do do something with them. Since I didn't have any pork feet which usually provide good natural gelatin, I added added a couple of packages of commercial gelatin to the broth. This resulted in a well-bound product that can be sliced very thinly without crumbling. The salceson was cased in beef bungs. A natural casings makes it look so much better! 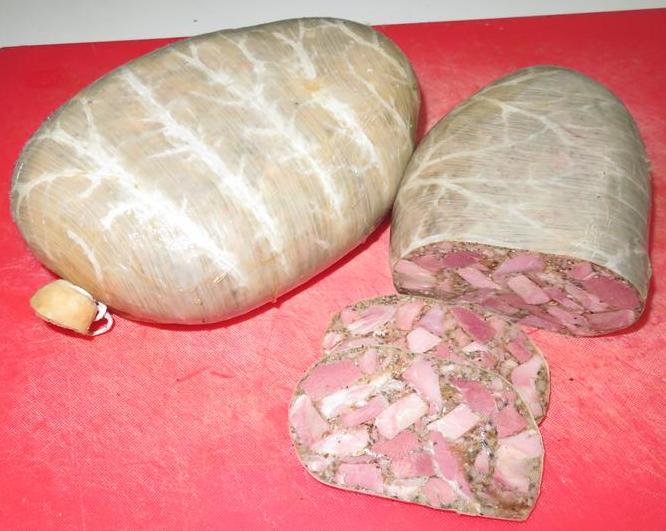 Hocks and Tongue were cured in an 8% brine with Cure #1 for 4 days. A small amount of salt was added to the broth after cooking the meats. Seasoned with fresh garlic from my garden, .2% caraway, .4% BP and .05% mace.
Top
Post Reply
81 posts