What to do when it's -30C ? Smoke a brisket!!!
I've done one about 15 yrs ago and from what I remember, turned out really, really dry. Thinking I know a little bit more this go around, I injected the 10 pounder with some beef broth overnight and gave it a dry rub of garlic and onion powder, paprika, chilli powder, salt, bl pepper and some chilli flakes. Smoked it for 6hrs on oak, at 90C, with the fat cap up, trimmed initally, then another 2 hrs with the fat cap down. Make a marinade of beef broth, beer, roasted garlic and some of the remanining dry rub. Put the brisket in the marinade, covered it up, turned the temp up to 140C, and left it there for another 2 hrs, till the internal temp reached 90C. Let it rest for an hr and it turned out nice and juicy, with a lot of flavour. Certainly will be doing this again but with other spices/flavours.

by Butterbean
Looks great! I found learning to smoke brisket to be the most challenging meat to smoke properly on a consistent basis. I had several fails but finally learned its a matter of time and getting it to the proper internal temperature like you did. I've never tried injecting and really haven't seen the need however I might give it a try next time. Normally takes me around 10-12 hours to cook it. Lot of time but worth it in the end. 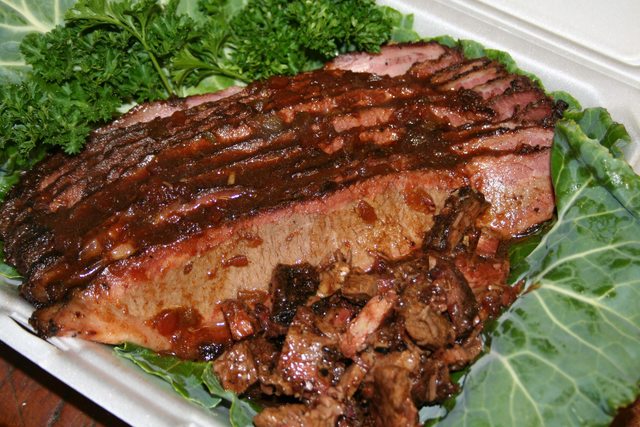 by jjnurk
I think you're right BB. There is no need to inject, I did it thinking that it would moisten the meat. I believe the most crucial component is when the brisket is finished smoking for the 8 hrs, it needs to be wrapped with either aluminum foil or butcher paper, to seal in the moisture for the remainder of the cooking process. I dont think the marinade is even required at the end, in fact the copious amount of spices may be an overkill. Salt and pepper only. Each to their own. At the end of the day ......... as long as it tastes good. Gotta experiment some more

by Butterbean
I agree. I don't think there is any right way to cook a brisket as long as it tastes good in the end. I do however believe to make a good brisket its a matter of patience and internal temperature but each time I make one I'm usually do another experiment searching for what might be the holy grail of brisketdom.